Trump is not going to implode

Fareed Zakaria
is an Indian American journalist and author. He is the host of CNN’s Fareed Zakaria GPS and writes a weekly column for The Washington Post. He is the author of five books, including The Future of Freedom: Illiberal Democracy at Home and Abroad (2003) and The Post-American World (2008).

Łukasz Pawłowski
is a managing editor and regular contributor at “Kultura Liberalna”.

“The idea that Trump’s presidency will implode or that he himself will come to a conclusion that this job is too demanding is a fantasy. He is either going to survive his term or we will see a political bloodbath”.

Łukasz Pawłowski: Over a year ago, before Donald Trump was elected we spoke about the rise of illiberal democracy even in countries with strong democratic traditions, like the United States. What has changed over the first year of Trump’s presidency? Is illiberal democracy still on the rise, or has it been compromised by what has happened over the past 12 months?

Fareed Zakaria: The struggle between the forces of illiberal and liberal democracy is still going on. There are three sets of things that encompass the Trump phenomenon. One is the kind of circus we observe at the White House – his crazy statements and emotional reactions to daily events. The second is policies themselves which are a strange mixture of populism and reactionism. The third element, which I regard as the most consequential, is his criticism of institutions, laws, and practices of liberal democracy. By that, I mean his consistent attacks on the press, independent judges, FBI, government bureaucracy, etc. Very few presidents have ever done that before. Now we are going to see how strong these institutions are and whether they can withstand these assaults. That seems to me to be the big struggle and there are versions of it taking place all around the world, including Poland.

Don’t you think that at least some of the institutions you mentioned are fighting back? There’s an independent inquiry led by Robert Mueller who investigates if Trump’s team colluded with Russians during the campaign. The judiciary is challenging at least some of the president’s decisions, for example, his famous immigration ban. Then, there are the media, which incessantly report on how dysfunctional this White House is. And people want to listen to it. The recent book “Fire and Fury” by Michael Wolff has become a number one bestseller.

It is true that the institutions are fighting back, but the American system is unusual in the sense it has very strong protections for these institutions, precisely in order to protect the liberal order. For example, as Trump keeps pointing out, if American libel laws were more like European, he would be able to muzzle the press much more effectively.

We should also keep in mind, that although institutions are very important to upholding liberal democracy, so are the norms which are often not codified into laws.

What do you mean?

For example the fact that Donald Trump has failed to disassociate himself from his businesses in any meaningful sense. He did what was legally required but in fact, he continues to simultaneously operate in the White House and the business world, promoting his brand. That is a clear reminder that a lot of what makes liberal democracy work are just informal norms. And if those are violated, it’s not clear what to do about it. If the next president comes and says he’s not going to release his tax returns because Trump did not, what can we do? There’s no legal requirement, it was a tradition that developed over the last half of century.

That is for me a second important issue. How to preserve norms that cannot be codified into laws or institutions. 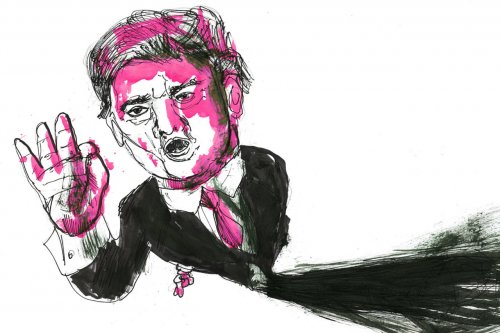 After a year of Trump’s presidency are we seeing any breakthrough in the social mood? The president’s approval ratings keep on hitting new lows and the Republican Party lost governor elections in New Jersey and West Virginia as well as a senate race in Alabama – an extremely conservative state. Is this a sign that even people in traditionally Republican states are growing disillusioned about Trump’s leadership?

I don’t think there’s a turning point here. Liberals have a kind of fantasy that Trump is somehow going to implode. I don’t see that. The Republican establishment is very strong and has essentially taken over large parts of Trump’s presidency. They are still not able to control him entirely, especially his Twitter account. But if you look at policy he pursues it is the kind of deregulation agenda which is in line with what the party establishment wants.

How can American liberals prevail?

The only way Trump can leave office before the end of his term is if he is impeached. The impeachment, however, is a political process and Republicans are never going to do that.

Some liberals hope Trump can be forced out, just like Richard Nixon was in the wake of the Watergate scandal. People forget but Nixon had enough votes to survive in the Senate and lost them only after Alexander Butterfield, one of his closest aides, testified before the US Congress that the president had put in place a taping system and therefore was recorded on tape obstructing justice. And that was a Democratic Senate! So what is a chance that today a Republican House and Senate would impeach Trump?

Republicans may lose both the Senate and the House after mid-term elections in November.

That is correct, but until we know the results of mid-term elections there seems to be no chance for impeachment.

All depends on what Robert Mueller’s investigation reveals. Even if it did reveal something incriminating, Trump will fight. He is not Nixon. He’s not going to resign quietly. He can go to the streets, he can contest the verdict, he can tell his supporters that he is a victim of a soft coup. What consequences all this would have for the country worries me deeply. The idea that Trump’s presidency will implode or that he himself will come to a conclusion that this job is too demanding is a fantasy. He is either going to survive his term or we will see a political bloodbath.

Why do so many working-class Americans still support Trump? His single major achievement after one year in office is a tax reform which will primarily benefit the most affluent Americans.

For a variety of reasons, people are not as motivated politically by economic reasons as they are by issues of culture and identity. As a result, even if people don’t approve of some policies – for example, Trump’s tax cuts for the wealthy – it’s not the primary reason for why they attach themselves to Trump. Far more important is class identity, cultural identity and social issues like immigration.

What’s then the way for liberals to win over those people? Some of the pundits argue that Democratic Party needs to drop politics of identity and focus more heavily on the economy. They encourage liberals to put social issues to the side and turn the Democratic Party again into a party of blue-collar workers, who now vote for conservatives. Bernie Sander’s campaign is often used as an example of how successful such strategy can be. This may seem convincing but on the other hand, if it is the identity that really matters – as you seem to claim – then side-lining social issues would be suicidal for liberals.

The problem with the economic argument is that by promising more generous social policy you can convince core liberals, but you’re not going to get those people in the middle, in Pennsylvania and Ohio for example, who support not only Donald Trump but vote pretty consistently for Republicans. The phenomenon goes beyond Trump. Republicans have now greater control over American politics than at any point since 1920’s. If the Democratic Party loses just one more state legislature they will lose the ability to block amendments to the Constitution. They are that weak and it’s not just because of Trump.

What are the other reasons?

Democrats need to ask themselves – does it really make sense to them to be as absolutist on issues such as immigration? Liberals should not have difficulty to speak strongly against illegal immigration. Similarly, on many social issues, there needs to be a greater recognition that societies change slowly and people take time to adjust to some of these changes.

If you tried to analyze American politics solely from an economic point of view you would miss the central lesson of the last 20 years – that the working class people have moved consistently to the right, ever since the so-called Reagan Democrats. These people are not moving right because they like capital gains tax cuts or the reduction of taxes for the wealthiest. It’s a libertarian fantasy to say that these people are moving to the right because they are aspirational billionaires and that they all believe they will one day be as rich to benefit from those cuts. They are moving to the right because the Republican Party seems to them a bulwark against the forces of multiculturalism, globalism and social changes, such as gay rights or abortion.

And if you listen to Trump’s speeches these are really the issues he campaigned on. What he promised to his voters was not so much the money but protection.

“Patriotism is the last refuge of a scoundrel”

Martin Wolf in conversation with Łukasz Pawłowski · 4 January 2018
“There’s a famous line in English which says that «patriotism is the last refuge of a scoundrel». A lot of it is just flag waving which really disguises the desire of uncompetitive industries and groups to…

Padraic Kenney · 8 March 2022
If Putin wanted Ukraine, he needed to invade the 1985 version. The Ukraine of 2022 is somewhere else entirely.

On polyamory, the migration crisis and right-wing populism

Peter Singer in conversation with Emilia Kaczmarek · 27 July 2017
We meet Peter Singer in a Warsaw bookstore. The biography of Singer’s grandfather, “Pushing Time Away: My Grandfather and the Tragedy of Jewish Vienna”, has just been translated into Polish. Although the…

Jakub Bodziony · 13 April 2021
According to right-wing vloggers, as many as 500,000 people gathered on 30 August in Berlin to protest under the slogan “call off the pandemic”. A similar event was planned in Warsaw, with participants organising everything via Internet.
‹ › ×
‹ › ×