Has Poland managed to deal with its past? “Kultura Liberalna” in Oxford [WATCH ONLINE]

Lustration, opening the files, compensation for damages, Nazi and Communist crimes, Jewish-Polish relations, educating the public, atonement, forgiveness, reconciliation, justice. These are just a few notions repeated numerously over the past 27 years in Poland since embarking on a democratic trajectory. While other countries like Germany, Japan and South Africa have struggled to reconcile with difficult pasts, the Polish case proves to be one of the most complicated. Poland’s geopolitical location in the 20th century resulted in a series of atrocities, including the consequences of two totalitarian regimes, two wars, genocide and the fallout from a long,-lasting authoritarian communist regime. Poles were treated as victims, perpetrators, passive observers – all these roles were very often interpenetrating within one single biography.

Has Poland managed to deal with its past? How does the Polish case compare with the experiences of other countries which faced comparable challenges?

Portions of the conference will be broadcast online via Kultura Liberalna You Tube channel. Polish recipients will have the opportunity to ask the panellists questions and comment on their speeches on St Antony’s College’s Twitter (@StAntsCollege / #difficultpast).

The conference is co-organised by the European Studies Centre at St. Antony’s College, University of Oxford and “Kultura Liberalna” (Liberal Culture), under the auspices of the Programme for Modern Poland (POMP) founded by the Oxford Noble Foundation

The debate will be held in English.

More information can be found on the event’s Facebook page:

The programme of the conference will be published shortly.

The idea of promoting Polish Studies on world-wide universities – why is it important for Poland?

At the heart of supporting studies about modern Poland on the most prestigious worldwide universities, lays the idea that, today, the economic and political success, as well as a strong position in international relations, depends highly on an international profile. The Polish economy has grown impressively over the last two decades; however, in terms of recognisability, Poland is still disproportionately low. Programme on Modern Poland is a response to the challenge of building a strong position for Poland in international relations. Educational projects, placed at the top world universities, will reach hundreds and thousands outstanding students. These programmes should become a breeding ground for “ambassadors and friends of contemporary Poland”, a place where future leaders and decision-makers from throughout the entire world, specialists in economy and international relations, will get to know Poland as a regional leader and a dynamic economy, and not just from the point of view of its difficult history.

The Programme on Modern Poland on the Oxford University, initiated in 2012, is the first program of studies on contemporary Poland and transformations after 1989 in history offered beyond Poland’s borders. The programme was initiated by the outstanding scholars, including Professor Norman Davies and Professor Timothy Garton Ash. The programme honorary patrons include former Prime Minister Tadeusz Mazowiecki (1927-2013) the father of the success of the Polish transformations, and Professor Zbigniew Pelczynski – one of the most accomplished Poles at Oxford and a social activist, who has been supporting Polish students over the last 15 years. Dr Leszek Czarnecki founded the Programme on Modern Poland through Noble Bank and the Oxford Noble Foundation. 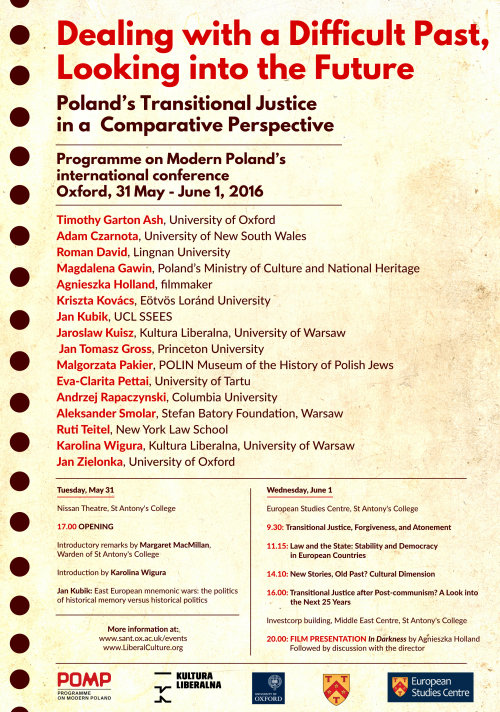 Will the year 2021 see the end of the gold era of illiberal populists?

Karolina Wigura and Jarosław Kuisz · 12 April 2021
“Law and Justice’s approval ratings have fallen significantly in recent months, possibly in part due to the pandemic, responses to which require a politics based on solidarity, cohesion and trust. And yet, Jarosław Kaczyński continues to the same tools that brought him to power.”

Jakub Bodziony · 13 April 2021
According to right-wing vloggers, as many as 500,000 people gathered on 30 August in Berlin to protest under the slogan “call off the pandemic”. A similar event was planned in Warsaw, with participants organising everything via Internet.

The most corrupt administration in American history

David Frum in conversation with Łukasz Pawłowski · 17 July 2018
“This is the most corrupt administration in American history. By any measure. The president continues to operate a global company and received payments from people around the world. It is obviously…

Are you rich? It all depends on comparisons

Philip Zimbardo in conversation with Emilia Kaczmarek and Filip Rudnik · 11 June 2018
Emilia Kaczmarek: Are you happy with the amount of money you have on your disposal? Philip Zimbardo: More than happy. I was born in 1933, during the Great Depression. I grew up in family of second generation…