Institute of Human Sciences in Vienna, University of Warsaw, and Kultura Liberalna are pleased to invite you to the XXVIIth Tischner Debate: Does capitalism need liberalism?

The year 2017 marks a decade since the outburst of the world-scale financial crisis which has resulted in the longest period of economic stagnation after 1945. In addition to economic troubles, Europe had to cope with other pressing challenges, such as mass migrations, rapid technological and ecological transformation, violent conflicts at the European borders, and a rising popularity of social movements which reject the whole political-economical system.

All of this means, that we live in a time of extraordinary political instability. What will be the consequences of these processes for Poland, Europe, and the Western world? Are we heading towards ever more authoritarian regimes or is it still possible to sustain the liberal order of human and citizen rights under the new conditions? Does the current political-economical system have a sufficient capacity to reform itself and achieve a new democratic legitimacy? Does capitalism need liberalism? These will be the points of debate between our eminent guests.

The entry is free.

Agata Bielik-Robson is a Professor of Jewish Studies at the University of Nottingham and at the Institute of Philosophy and Sociology at the Polish Academy of Science in Warsaw. She has published articles in Polish, English and German on philosophical aspects of psychoanalysis, romantic subjectivity, and the philosophy of religion, especially Judaism and its crossings with modern philosophical thought. Her publications include, among others, Na pustyni. Kryptoteologie późnej nowoczesności (In the Wilderness. Cryptotheologies of Late Modernity, 2008), Romantyzm. Niedokończony projekt (Romanticism. An Unfinished Project, 2008), The Saving Lie: Harold Bloom and Deconstruction (2011), Erros. Mesjański witalizm i filozofia (Erros. Messianic Vitalism and Philosophy, 2012).

David Ost is the Joseph DiGangi Professor of Political Science at Hobart and William Smith Colleges, and frequent visiting professor in eastern Europe. He has written widely on eastern European politics and society, with a focus on political economy, democratization, capitalism, and labor. Author of several books on communist and postcommunist society, including The Defeat of Solidarity: Anger and Politics in Postcommunist Society, which received the Ed Hewett award for Best Book in Political Economy, and which, after being published in Polish translation in 2007, has played a significant role in Polish political debates.

Jan Zielonka is a Professor of European Politics at the University of Oxford and a Ralf Dahrendorf Fellow at St Antony’s College. His previous appointments included posts at the University of Warsaw, Leiden and the European University in Florence. Zielonka teaches European Politics and Society and directs a large international project funded by the European Research Council on the Media and Democracy in Central and Eastern Europe. He has produced seventeen books, including five single author monographs, and more than a hundred articles and chapters.  His work has been published in English, Polish, Russian, Chinese, Slovak, German, Italian, Spanish and French. His main areas of expertise are in Comparative Politics, International Relations and Political Theory.

Marcin Król is a professor of intellectual history, a philosopher, and a writer. He is the Chair of the Department of the History of Ideas and Cultural Anthropology at the Institute of Applied Social Sciences of the University of Warsaw. A professor of humanities since 1999, he was the creator and long-time editor-in-chief of Res Publica and Res Publica Nowa magazines. He is an author of many books, articles, translations and essays. Among others, he has recently published “Europa w obliczu końca” (The End of Europe, 2012), „Klęska rozumu” (The Failure of Reason, 2013), “Pora na demokrację” (Time for Democracy, 2015), “Lepiej już było” (Better Times Are Gone, 2016), “Jaka demokracja?” (What Democracy?, 2017).

Ivan Vejvoda is IWM Permanent Fellow, previously Senior Vice President for Programs at the German Marshall Fund (GMF) of the United States. From 2003 until 2010, he served as Executive Director of GMF’s Balkan Trust for Democracy. He held various academic posts in the United States and the U.K., including at Smith College in Massachusetts and Macalester College in Minnesota, and the University of Sussex in England. Vejvoda was a key figure in the democratic opposition movement in Yugoslavia during the 1990s, and has published widely on the subjects of democratic transition, totalitarianism, and post-war reconstruction in the Balkans. 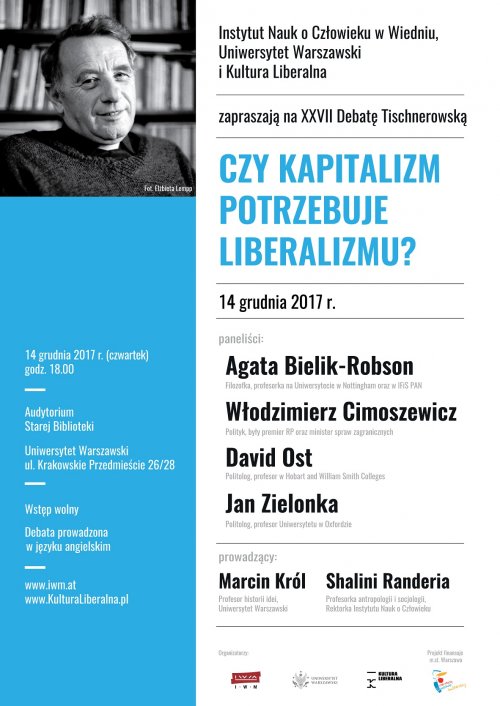 More in Media Mentions READ ALL

"Kultura Liberalna" · 10 March 2015
Leading experts in the fields of democracy and digital technologies will participate in the 22nd Tischner Debate, the latest event in a well-known series of public discussions. It will take place on 12th March 2015 at 6:00pm in the auditorium of the University of Warsaw’s Old Library (26/28 Krakowskie Przedmieście Street, Warsaw).

23 April 2015
An article by Piotr Kieżun of Liberal Culture has been published in No. 555 / May 2015 of Le Magazine Littéraire. ‘Le fil renoué’ concerns the influence of French literature on Polish intellectual life in…

Liberal Culture · 10 November 2015
Intellectuals and politicians will participate in the 23rd Tischner Debate, the latest event in a well-known series of public discussions. It will take place in the Column Hall of the Faculty of History of the University of Warsaw (26/28 Krakowskie Przedmieście Street, Warsaw) on 18th November 2015 at 6 pm.

31 July 2015
An article by Karolina Wigura, Liberal Culture political section chief, has been published in Osteuropa 4/2015. In ‘Die ausgebrannte Generation’ she analyses the social context of Polish presidential elections…

Liberal Culture · 17 November 2017
Institute of Human Sciences in Vienna, University of Warsaw, and Kultura Liberalna are pleased to invite you to the XXVIth Tischner Debate devoted to the problem of contemporary religious tolerance. Should…
‹ › ×
‹ › ×