Introduction. The Horizons Of a New Freedom

Maria is a 70 year-old retired engineer. Following the Transformation of 1989, she worked for over a decade outside of Poland, then returned home to retire. Maria and her family enjoy a decent standard of living, yet she lacks a developed sense of self-worth and fulfilment. Although she is aware of the modernisation taking place in Poland, she can’t see any room for herself in its new reality.

Szymon is a 40 year-old manager. Six years ago, he lost his job in a large telecommunications firm based in Warsaw. For a long time afterwards, he was unable to find any sort of employment sufficient enough to support his wife, son and daughter. Sometime later, he sent his CV out to employers in London. That same month, he was invited for interview and offered a permanent contract. Szymon moved his whole family over to the British Isles, where he earns a handsome wage. There is not a single reason he can think of which would bring him back home.

Janek is a 24 year-old driver, with a wife and two young daughters to support. He spent a year working for someone illegally, having been promised that one day his position in the company would formally be made permanent. Eventually, however, he was fired overnight. Today, Janek works for a public transport company. He drives buses 10 hours a day in order to take home a meagre 2,000 zlotys a month. When he tried complaining to his bosses, he was told: “Shut up, sonny, else you’ll be out on your ear.” Janek is still looking for work, also abroad.

Over the last 25 years of Poland’s independence three new generations of workers have entered the job market, yet the fates of one doesn’t necessarily translate into success for the next. Paradoxically, all three generations are united by a weakened sense of self-worth and anxiety about the future. These two emotional states overshadow any sense of joy they might have about how Poland has developed in the last few decades. Few Poles are interested in the opinions expressed by their politicians, who appear to constantly curse present-day reality, be it through messianic myths about the Smolensk air crash of 2010, or about the economic situation on the Emerald Isle.

Yet Janek, Szymon and Maria are united in their need for some sort of comprehensible narrative, one which would add substance to the idea of a Polish commonwealth. Today’s politicians cannot evade the responsibility of becoming leaders, especially as stories about the failings of the past few generations are becoming ever more common. Certain people – both from the Left as well as the Right sides of the political spectrum – are willing to reinterpret the past 25 years of change as a tale of the excluded, of victims of the Transformation and predatory capitalism, about the sky-high price Polish society has paid for its liberation. This process is aided by political promises, usually made without substance. The political centre is at threat, amorphous and defenceless. It is not only surrounded by myths of lethargy and corrupt affairs, but also by ahistoricity, yet unfairly so. Polish liberal thought has evolved to offer at least some hint of cure for the issues ailing contemporary Poland.

First of all, localism. What we need is for a language of pride to enter the wider discourse, pride at where one is from, along with a language which gives positive value to the struggle over one’s immediate environment.

The most active group of Poland’s younger citizens can be found at work in this area. Here is where people engaged in the third sector are to be found, as well as those working in social fields, driven by a sense of mission. Here is also where young urban activists gather.

“The street is my motherland,” they say, with utter conviction. Those who learn to how to converse with this social demographic will gain the support of the younger generation. Polish liberals can reliably reach for roots dating back a quarter of a century. They – as some of the first – supported the ideas of regionalisation and a Poland of “smaller homelands”. Today, these stories of the past sound more relevant than at any other time. Here we find room for a sense of pride at things achieved at a certain time and place – plus, endless pro-emigration sentiments can be countered by increased ability to perceive potential for development closer to home.

Secondly, the needs of the individual is once again coming to the fore. Each Pole would like to discover a sense of personal self-belief. The question is, how do we find this dignified aspect in the current political environment? Regardless of generation, voters are ready to speak most vocally about the state of their nation and Polish politicians. When, however, they are asked about their more personal experiences, we are more likely to be presented with a brighter, more positive picture.

So, it is now time to take a look at these individuals and their unique life histories, to set aside the affirmations of bridges built and roads repaired, and to once more affirm the self-reliant abilities of the average Pole, mindful of the changes around the individual and their family. Polish liberals have emphasised the way in which people, during the last few years of communism, ridiculed the idea of trying to achieve dignity through work and possessions. Today, it’s worth remembering those all too real experiences, without forgetting that at present it is the young who are most anxious about the future. Those who are able to talk to them about these concerns and pour hope into their hearts will win their trust.

Thirdly, we need to redefine the concept of freedom. According to data provided by Eurostat and GUS*, social inequality in Poland has not risen in the past few years. In this respect, Poland is doing better than many other EU states, and especially the US. Many people, however, express the opposite opinions, arguing that statistics are not everything, that a subjective perception of inequality must also be taken into account.

And so we must change the language with which we talk about freedom and justice. We can no longer equate the former with free market economics, while ignoring its unifying aspects. Freedom which does not allow citizens to enjoy its benefits will then become an insignificant and hollow word.

Only if we manage to take into account all three of the above mentioned elements will we be able to create a grand new narrative about Poland.

This article is a part of Kultura Liberalna’s book “To place Poland in the centre”. See the table of contents here. 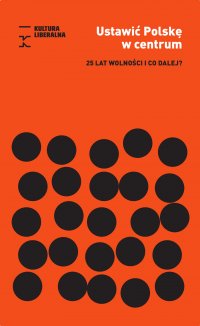 Liberalism, the Right and the Left – points of contention

Liberal Culture · 3 September 2014
EVALUATING POLAND’S POLITICAL TRANSFORMATION Both the Left and the Right wings of Poland’s political divide see the post-1989 Transformation in a singularly negative light. For the Right, the Round Table…

Jarosław Kuisz · 3 June 2014
The time has come to change the story we tell about contemporary Poland. The 25th anniversary of the first free elections in its modern history appears to be a celebration which has Polish citizens smiling, but…

A whole new sense of frustration

Marta Bucholc · 3 June 2014
My hypothesis is as follows: in order to sum up the past 25 years of Polish history, we must take into account the sense of frustration which comes with being offered endless possibilities. The map of Polish…

Children of the Transformation

Piotr Kieżun · 25 March 2014
On the subject of Paulina Wilk’s book “Special characters”   They can remember Poland under communism, yet they have been raised and educated in a new reality. Not yet old, but no longer young. Who…

Łukasz Pawłowski · 23 March 2014
They aren’t just responsible for hail, earthquakes and whooping-cough –this is the impression one might have reading ongoing attacks unleashed a full 25 years after the Transformation against liberals and…

Memories of the transformation or transformed memories?

Błażej Popławski · 1 August 2014
Interest in the concept of collective memory tends to grow during extraordinary moments, in times of crisis or change. More “round” dates allow us to reinterpret the past. At times, this is merely a…

Squabbles and saintliness. The Left and the Right and their problems with the Round Table

Tomasz Sawczuk · 11 February 2014
Disputes over the Round Table are also disputes over our present-day democracy. Tomasz Sawczuk presents his commentary on the debate which took place in the Presidential Palace as part of the celebrations of…

Energy, ecology and freedom. On the unfinished liberal revolution in the energy industry

Kacper Szulecki · 3 September 2014
Edward Gierek, former First Secretary of the Polish Communist Party, had energetic dreams about power. Back in the days of General Jaruzelski, work had begun on building an atomic power station in Żarnowiec….

The Round Table – the meaning of the game

Karolina Wigura · 11 February 2014
Many people believe the events which took place in Poland 25 years ago should today be reviewed with sobriety, leaving aside all unnecessary emotions or nostalgic tendencies. The problem with this apprach is…

The Feast of Imperfections

Łukasz Bertram · 3 June 2014
In the spring and summer of 1989, the people of Poland had no energy and no desire to celebrate their revolution. Does it make sense, however, to now regret this and to try to “make up” for lost time? How…

Michał Jędrzejek · 10 June 2014
The debate about the recently ended 25-year period of Polish history is becoming enlivened by the voices of critics of modernity. This simple story of historical triumph is now contrasted with apocalyptic…

“What a beautiful catastrophe” … ?

Jan Tokarski · 10 June 2014
Listening to media commentary covering the 25th anniversary of the first partially free elections in Poland, I couldn’t shake off the impression that older generations – the initiators and participants of…

Brzozowski, Bielawski, Borcuch, Pinior · 20 May 2015
Why has Poland’s turning point of 1989 not earned its own visual symbol yet? How are the times of the transformation perceived by both younger and older generations? Grzegorz Brzozowski in conversation with…
‹ › ×
‹ › ×