Bartłomiej Sienkiewicz · 10 March 2015
It’s rather strange that Slavoj Žižek hasn’t yet devoted one of his Lacanesque analyses of ISIS to the idea of it being a figment of Western pop-culture, in its most covert and simultaneously desirable form. It seems Islamic State Jihadists are made for such an interpretation. 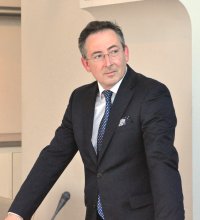 former Interior Minister of Poland (2013-2014), chief of the Civic Institute in Warsaw.

Dressed like ninjas, as cruel as characters from horror B-movies, using sex as a weapon against their enemies and as bait for new converts, ISIS shock with their ruthlessness. In their recordings of execution after execution, instantly posted online, the process of crossing certain lines appears to have been designed by the best marketing experts in the world. Now that we have become used to (precisely – are we used to it?) a shy lad from a British “lower secondary school” acting as an ISIS executioner, cutting the heads off of prisoners, suddenly the stakes have been raised: as in the image of 24 Christian hostages, dressed in orange jump suits (Guantanamo for the crucified), their heads severed on the shore of a sea, the film ending with a shot straight out of cinematic history – an empty beach, its waves running red with blood.

Along the way, ISIS ran a global survey among its followers, asking what sort of death should be dealt to a captured Jordanian pilot. The majority of respondents chose for the victim to be burnt alive, which was then duly carried out, in accordance with all the rules of televised Western contests, where the public votes on whether a competitor stays in or is eliminated. The fact that this particular show was about something other than ballroom dancing, pop songs or beauty pageants, was immaterial. Everybody gets to watch what they want these days. And ISIS likes the kind of shows where the stakes are set at death and destruction. The death and destruction of all that which the West considers valuable or taboo – the smashing of ancient statues in Mosul, the dynamiting of priceless ruins, the torching of libraries. The elimination of all forms of diversity – from those who have different belief systems and ethno-religious minorities to the filmed executions of members of the LGBT community.

Narratives produced in the West as part of our pop-culture, in thousands of tame and banal films, music clips and online uploads, ISIS has brought to real life. Only even more so.

ISIS is also surrounded by an aura of uniqueness, penetrating to the metropolis of the West, drawing to them volunteers who abandon their lives in the suburbs of London, Brussels or Paris (as well as the towns and villages of the Russian Caucasus) in exchange for a face-concealing mask, a black banner and a Kalashnikov. They also attract women, or rather teenage girls, who use their bodies to serve the warriors of the true faith, something which has even began to be ridiculed by films in the USA. ISIS is offering its followers and members violence and sex – unlimited and so extreme that “front line reports” suggest ISIS has began to import large quantities of Viagra to help its soldiers manage both mass rapes and revels with their “wives” and slave women.

Narratives produced in the West as part of our pop-culture, in thousands of tame and banal films, music clips and online uploads, ISIS has brought to real life. Only even more so. And it has turned these into their signature mark, their “brand” which attracts new followers on a scale comparable to that of Coca-Cola or Google. In a world in which recognisability and logos are the keys to the minds and the pockets of the populace, they have created a brand which represents the ultimate nightmare. A nightmare straight out of an online search engine.

It is of course possible to show that even before ISIS similar methods had been applied – in Bosnia, Africa, in the operations of Al-Qa’ida. But ISIS has drawn conclusions from these antecedents and created a system which is far more effective than their predecessors. This is a war being waged not only in the lands of Syria and Iraq, but in the minds of a global audience. ISIS has made unparalleled use of the triad of tools used to form the traditions of the modern West – religious tolerance, freedom of speech and the internet – and has turned them against the West itself, against the very concept of liberal-democratic society. This is a new war, where the stakes are no longer just military advantage in the field of battle, as in the worn-out doctrines of Clausewitz, but in the use of marketing strategies developed in the era of global turbo-capitalism.

Religion, along with the prophet Mohammed, serves merely as decoration here, a tool, an easily accessible and attractive format, without having any decisive influence on content.

ISIS is not only a political and military concern, but affects society and culture too. The coalition forming in order to eradicate this new form of jihadism will probably achieve its aims in the end, and manage to at least limit the reach and the abilities of ISIS to grow beyond its local sphere of influence. This will take some months, will cost plenty of money and attract all sorts of unexpected, silent allies. Along with the USA and its European friends, also present will be Israel, Russia, Iran and the unvanquished Assad. Yet many Arab states will also stand alongside them, shocked at the speed with which the ISIS wildfire is being spread by warriors in the region.

This doesn’t change the fact that we are witnessing an event on a global scale, in the same way the dominance of the West has been a global phenomena since the end of the Cold War. Anyone encountering a rich demo-liberal civilisation and feeling a loss of standing, through poverty say, has the excuse to rebel. And the tools which can be used to strike up such a rebellion are the very tools created to facilitate the might of free speech and interpersonal communication. ISIS will disappear in the end, presumably, but we should already be concerned about who will follow in their footsteps, who will learn from their mistakes, for the bar is forever being raised in the game of this conflict.

Over fifty years ago, Arnold J. Toynbee, in his “Civilisation on trial”, wrote: “It’s true that Pan-Islamism is sleeping – but we also have to contend with the eventuality that if one day the urbanised, cosmopolitan proletariat rebels against Western domination and demands an anti-Western leadership, the sleeper might awaken.”

The global proletariat, being able to access – using computers, televisions, smartphones – visions of a world of prosperity forever out of their reach, living in a constantly humiliating gap between aspiration and reality (something covered in the writing of Peter Sloterdijk), is a space in which the real battle for the future of the world is taking place.

This is no “God’s wrath”, no return to political theology or some “islamo-fascism”, as is often suggested in reoccurring expressions of ever-growing resentment. Religion, along with the prophet Mohammed, serves merely as decoration here, a tool, an easily accessible and attractive format, without having any decisive influence on content. This is an answer to a world globalised by Western culture. A global answer.

The real dangers are still to come

Carl Bildt in conversation with Łukasz Pawłowski · 8 July 2016
“We need to be more prepared to deal with the unpredictability of Russia. Russia is opportunistic in the sense it is ready to use military force, when opportunities arise”, claims former Prime Minister of Sweden.

On polyamory, the migration crisis and right-wing populism

Peter Singer in conversation with Emilia Kaczmarek · 27 July 2017
We meet Peter Singer in a Warsaw bookstore. The biography of Singer’s grandfather, “Pushing Time Away: My Grandfather and the Tragedy of Jewish Vienna”, has just been translated into Polish. Although the…

Chechen Stories at the Polish Borders

Laurent Vinatier · 12 March 2014
Whether or not the story is real, no one can really assure. But it has been heard for a while among the Chechen refugees’ contingents on their way far from their war-ravaged homeland in the early 2000s.

Paweł Śpiewak · 18 September 2015
By publishing his latest article in the German press Jan Tomasz Gross in a way “denounced” Poles. As if absolving Germans from their sins by saying: “remember, there are always the Poles – equally maleficent, but less settling”.

Richard Pipes in conversation with Jarosław Kuisz and Łukasz Pawłowski · 6 October 2015
American historian and a former member of the National Security Council speaks on on Western policy towards Russia and Russian military involvement in Syria and Ukraine.