Nationalism – a master key to open all doors?

Łukasz Jasina · 13 May 2014
Fears of Ukrainian nationalism and of Russian imperialism have some historical grounding. But, as in all fears, these two contain traces of insecurity, delusion and only partly formulated arguments about national security being threatened.

The second Ukrainian revolution and the gains made during Euromaidan had the potential to dispel myths about the East as being some kind of barbaric Orient, a flashpoint of threat to the fortress that is Christian Europe. Maidan saw the forming of a new civic society, and after the fall of a dictator the Morning Star of democracy shone bright in the heavens. The tragic events of the past few weeks, caused by Russian aggression, however, are lessening the chance of a peaceful coexistence between the societies of Central and Eastern Europe.

The fired up imaginations of the masses

Europeans have always had a problem dealing with nationalistic ideologies. In a range of countries, for many long decades, the relationship between nation and society has remained at tenterhooks, while remembrance of the cruelties of totalitarian regimes remain fresh in everyone’s minds. For a few weeks now, the post-Cold War vision of a clash between “empires of good and evil” has once again fired up the imaginations of the masses. The clumping together of three discourses – nationalistic, totalitarian and imperial – is dangerous. Political transformations become more difficult to judge objectively, social sensitivity is diminished and an artificial cultural distance is formed between Russians, Ukrainians and the rest of Europe.

There is no point presenting the Ukrainian crisis in terms of exceptionality, madness and anarchy, as all it will then do is lead to “Western European-centricity”. It is hard, after all, to call Vladimir Putin’s strategies disparate. His involvement in Ukraine was, from the very start, meant to play on nationalistic and imperial tendencies, while he fuelled trends for hate speak. He was acting in full awareness of Brussels’ inability to truly grasp the specific nature of Kremlin’s diplomatic strategies. And of EU officials incapability to react effectively. 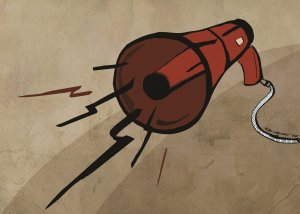 Many analysts missed a rather key fact. The increase in influence wielded by radical groups in Western Europe is happening, after all, within the limits of democratic rules of civil law. Currently, Western European media outlets’ comparisons between pro-Russian paramilitary units occupying Ukrainian state offices to Eurosceptic politicians fighting to win votes in EU Parliament is a dreadful mistake, a betrayal of reality in the style of Moscow’s politic.

Can the successes achieved by nationalists, and the empowerment of radical organisations in Western Europe, be considered any sort of indicators to help us understand the political transformations in Ukraine? Can a sole focus on the national element be sufficient in analysing events which took place in Sevastopol and Donetsk?

The newly independent Ukraine did not form its identity on the basis of nationalistic ideologies after 1991. The myth of the founding of a new nation was based on the remixing of external examples, especially post-Russian and inherently Ukrainian. Monuments to Lenin and the Red Army were left standing in all the main city squares (with the exception of Galicia and Volyn regions). The white-blue flag, the Trident or the slogan “Glory to Ukraine” – associated by many Poles with the Ukrainian Insurgent Army (UPA) – figured as decorative elements, an adornment which was honouring Ukrainian state traditions. In choosing these symbols, Ukrainians weren’t thinking of enemies of their nation, but about historical values, which would be widely recognised and accepted.

Of course, nationalism in Ukraine was always present – but mostly in its southern regions. Nationalistic views were also expressed by representatives of the Ukrainian diaspora in Canada and the US. Various parliamentary elections indicated, however, that the nation had not been seduced by nationalistic rhetoric. None of the radical parties gained any sort of substantial number of seats in the Supreme Council of Ukraine. This success came only once Oleh Tyahnybok took over leadership of Svoboda – there was, however, a serious need for an identity “refit”: a change in the tone it used, especially when concerning matters of Poland and Poles. The time of the revolution was rich in producing all sorts of marginal entities, but apart from Right Sector none of these upstarts are widely known. Right Sector itself is a suspect organisation, with questions still to be answered about its origins, its sources of funding and its relations with Russia. It is hard, however, to label it “evil incarnate”, the way Kremlin propaganda machine would wish. Why?

Ukrainian nationalists, unlike their counterpart organisations in the West, such as the The Fins Party (previously known as True Fins) or the French National Front, have never created a united front against mature democracies. Their discourse is, at best, simply bluster and noise. Ukrainian nationalists have, in all honesty, failed to seduce many of those which took part in Maidan demonstrations, though this is not proof of a consistent evolution in the political attitudes of Ukrainian society as a whole, but rather an indication of the uniqueness of its revolutionary experience – about how the Kiev political laboratory inspired people to seek out their own identities. In this dimension, Putin, perhaps unconsciously, came to the aid of Ukrainian nationalists, who then gained an exceptional opportunity to secure a large following. They appropriated the concept of the enemy, personified in this case by the Russian president.

This very phenomenon, based on the antagonisation of Russians and Ukrainians, may yet become real fuel for radical and nationalistic organisations. The rhetoric of imperial nationhood, so effectively wielded by Putin, reawakens the sleeping ghosts of Ukraine’s past – nationalistic discourses, ethnic in places, even totalitarian in some.

Gleb Pawłowski in conversation with Viktoriia Zhuhan · 13 May 2014
Vladimir Putin’s Russia is dominated by imperial rather than ethnic nationalism, according to our expert in Russian politics. If in the language used by the ruling elite we come across a certain type of syncretism, this is because the said rulers, having abandoned European ways of communicating, are looking for a new narration, and in doing so borrow from the likes of the far-right Dugin and the anti-semitic Kiselyov.

Michał Jędrzejek in conversation with Anton Shekhovtsov · 13 May 2014
Viktor Yanukovych’s fall from power means Svoboda has lost its most important means of negatively influencing voters, while also still lacking any tools of motivating them positively. The national colours of Ukraine were also the colours of the revolution – its society today, however, displays civic-republican rather than nationalistic tendencies.

We need to challenge Putin’s propaganda

Timothy Snyder in conversation with Jarosław Kuisz · 13 May 2014
On the initiative of professor Timothy Snyder (Yale University, IWM) and Leon Wieseltier (“The New Republic”) a conference “Ukraine: Thinking Together” will be held in Kiev from 16th May to 19th May. Before it begins we ask prof. Snyder to briefly explain the idea and aim of the meeting.
‹ › ×
‹ › ×