Michał Jędrzejek in conversation with Anton Shekhovtsov · 13 May 2014
Viktor Yanukovych’s fall from power means Svoboda has lost its most important means of negatively influencing voters, while also still lacking any tools of motivating them positively. The national colours of Ukraine were also the colours of the revolution – its society today, however, displays civic-republican rather than nationalistic tendencies.

PhD student at UCL School of Slavonic and East European Studies in London and European Fellow at the Radicalism and New Media Research Group.

Michał Jędrzejek: Russian media often use adjectives such as “fascist” or “Banderovite” (by which we are meant to understand “separatist-nationalistic”) in reference to the former opposition and current part of Ukrainian government. Are Svoboda and Right Sector (Praviy Sector) right-wing, nationalistic or perhaps fascist organisations?

Anton Shekhovtsov: These are far right-wing parties, but they differ in terms of their degrees of radicalisation and their histories. Svoboda can be compared to some other parties within the EU – the National Front, led by Jean-Marie Le Pen (even though it’s not the same Marine who markedly toned down the rhetoric within her organisation) or the Austrian Freedom Party from the days of Jörg Haider. Svoboda also has cells of operatives with fascist characteristics, but these are a minor feature of the party as a whole.

And what about Right Sector?

Here, things are more complicated. Right Sector was formed towards the end of November 2013, as a widespread movement which united various radical groups. Even though Right Sector emerged as a single body only around the time of the protests in Maidan, it was these groups – Trident or the Ukrainian National Assembly – that existed as far back as the 1990s. The most radical organisation, and truly fascist, was Patriot of Ukraine, registered in Kharkov a decade ago.

Is the West right in worrying about them?

Only in a certain sense. I don’t believe that these organisations have the power to bring Ukraine under a right-wing dictatorship. I am concerned, rather, that they could be manipulated by bigger political forces. This is how it is with Patriot of Ukraine, which contains many provocateurs working with the regime. This is also the story of Svoboda.

Yanukovych himself, for a start. It’s worth recalling that Svoboda’s predecessor was the totally marginal Social-National Ukrainian Party, set up at the start of the 1990s. “Social-National” doesn’t necessarily mean “Nazi”. The term “Social-National” comes from Jaroslav Stetsko, a Ukrainian nationalistic ideologue, who in his post-War essay “Two revolutions” stated that, apart from the creation of an independent Ukrainian state, what is also needed is a socialist government, one which supports trade and farming. In addition, political revolutions must go hand in hand with social revolutions. This is also the programme the party received after it changed its name in 2004. 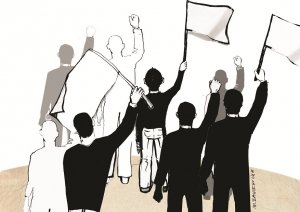 Did the change of name bring about an increase in popularity?

Not just that. The organisation gained a lot with the appointment of Oleh Tyahnybok as its new leader, the main architect of the changes which were implemented. And yet, in 2006 and 2007 they only gained 0.36 and 0.76 percent of votes. Success would come three years later, when Svoboda gained over 30 percent of votes in Southern Ukraine. This was when president Yanukovych and his advisors decided to use it in their struggle against the “orange opposition”. Svoboda’s representatives, even though they were’n in parliament, suddenly began appearing regularly on state television. According to plans drawn up by those in charge, Svoboda had to take some of the votes away from centre-right parties and put forward a candidate for president who, as an extremist, would be a comfortable opponent for Yanukovych in the subsequent elections. In effect, the parliamentary elections of 2012 gave Svoboda over 10 percent of votes.

Surely, its electoral success cannot be reduced solely to hidden support from Yanukovych?

That’s true. The high score was a consequence of a whole set of social and economic factors. It is difficult to talk here about a rise in xenophobia or racism in Ukrainian society. Above all, Svoboda was seen in Ukraine as one of very few parties capable of relating to any kind of ideological doctrine. For many voters, the profoundly problematic character of this very specific ideology was paradoxically secondary. Of greater importance was an authentic disappointment with the cynicism exemplified by parties which formed after the Orange Revolution. Svoboda filled a certain niche for voters with national-democratic leanings. On the one hand, it emerged as almost a new, energetic political force, a real alternative to the Party of Regions and president Yanukovych – and on the other to Batkivshchyna, steered, in the absence of the imprisoned Yulia Tymoshenko, by Oleksandr Tymoshenko and Arseniy Yatsenyuk, along with Viktor Yushchenko’s Our Ukraine. Interestingly, those who voted for Svoboda defined themselves as more pro-European than those who supported the “orange” parties.

Pro-European voters coming out in support of nationalists? How can we explain this paradox?

Svoboda managed to convince voters that they are force which is most consistent in resisting both the Yanukovych regime and Russian interests in Ukraine. Their radicalism could appear to be the best answer to the authoritarianism of the ruling elites. It was a party which surprised with its willingness to work with mainstream parties, as well as with the Committee Against Dictatorship, formed in response to Tymoshenko’s politically-motivated persecution.

And yet, what about Svoboda’s collaboration with other European far-right organisations?

Svoboda did indeed partner with such. In addition, it used the fact in its PR and propagandist activities. In 2000, it forged links with Euronat, an association of European far-right parties, as well as with other “umbrella organisations” representing nationalists. That same year, Jean-Marie Le Pen took part in a Svoboda party convention. Their partnership was long-standing and fruitful. It was the French who advised Svoboda, in 2004, to become a less radical party. In 2010, the leaders of Svoboda also formed an alliance with Austrians. From that moment on, their links with the European far-right were relatively stable – up until the start of 2013.

In 2012, Svoboda got into parliament. A year later, the protests in Maidan began. How did those latter events influence Svoboda’s political standing?

Svoboda’s active attitude in pro-European, pro-democratic protests, which started up at the end of November 2013, can appear to be a double paradox. Firstly, Svoboda began behaving differently to some of the other organisations in Europe it had sympathised with, and which are rather associated with anti-EU slogans. This is a key turn-around in their rhetoric. Secondly, for a long time Svoboda itself criticised the project of signing the EU entry treaties. However, its leaders quickly realised that EU integration is a better solution than Putin’s project of an Euro-Asian Union. Svoboda correctly read the pro-European mood among the electorate, noticing what a powerful platform for self-promotion Maidan could become. The trouble with this is that, in spite of all the changes, support for the party fell twofold right before events at Maidan unfolded and in November was estimated at no more than 5 percent. And it has remained at this level since. Svoboda has tried to gather public support through active resistance against the opposition, taking part in battles against the Berkut units, and so on. And yet it was at Maidan that many people saw that Svoboda is too radical, too divisive, socially. There were also whispers about it being manipulated by the Kremlin. And so its involvement in Euromaidan was really also its swansong…

Are you suggesting this is the end for Svoboda?

Yanukovych’s fall from power was a key loss for Svoboda’s policy of negatively motivating voters. Besides, although the colours of the revolution were the colours of the national flag, Ukrainians, having gone through hell and high water, tend to lean towards policies of citizenship and republicanism, rather than exclusion and nationalism. There are also other factors. One of the first people to die in Maidan was a man of Georgian origin. Then, alongside Ukrainians, other Armenians, Belarusians and Russians protesting arm in arm with Crimean Tatars also fell. Many Ukrainians now see that the divisive rhetoric of ethnic nationalism is harmful and does not serve Ukraine as a whole. What we also see is a desire for a new language, one which can encompass the diverse group of over 100 individuals who died in Maidan. This “Heavenly Hundred Heroes” has today become a new national myth. A myth which refers to the most recent events and is far more cohesive than any of the rhetoric put forward by the likes of Svoboda.

Gleb Pawłowski in conversation with Viktoriia Zhuhan · 13 May 2014
Vladimir Putin’s Russia is dominated by imperial rather than ethnic nationalism, according to our expert in Russian politics. If in the language used by the ruling elite we come across a certain type of syncretism, this is because the said rulers, having abandoned European ways of communicating, are looking for a new narration, and in doing so borrow from the likes of the far-right Dugin and the anti-semitic Kiselyov.

Nationalism – a master key to open all doors?

Łukasz Jasina · 13 May 2014
Fears of Ukrainian nationalism and of Russian imperialism have some historical grounding. But, as in all fears, these two contain traces of insecurity, delusion and only partly formulated arguments about national security being threatened.

We need to challenge Putin’s propaganda

Timothy Snyder in conversation with Jarosław Kuisz · 13 May 2014
On the initiative of professor Timothy Snyder (Yale University, IWM) and Leon Wieseltier (“The New Republic”) a conference “Ukraine: Thinking Together” will be held in Kiev from 16th May to 19th May. Before it begins we ask prof. Snyder to briefly explain the idea and aim of the meeting.
‹ › ×
‹ › ×